Where do you think I am writing this letter? In the garden! I have brought out a small table at which I am now seated, hidden among the shrubs. To the right is the currant bush smelling of cloves; to the left, a privet in flower, overhead, a sycamore and a young slender Spanish Chestnut stretch their broad green hands , in front is the tall, serious, and gentle white Poplar, its silvery leaves rustling in the breeze.

On the paper as I write , the faint shadows of the leaves are at play with the interspersed patches of sunlight; the foliage is still damp from a recent shower, and now and again drops fall on my face and hands.

Service is going on in the prison chapel; the sound of the organ reaches me indistinctly , for it is masked by the noise of the leaves, and by the clear chorus of the birds, which are all in a merry mood today; from afar I hear the call of the cuckoo. How lovely it is; I am so happy. One seems already to have the mid-summer mood- the full luxuriance of summer and the intoxication of life. Do you remember the scenes in Wagner’s Meistersinger, the one in which the prentices sing “Midsummer day! Midsummer day!” and the folk scene where, after singing “St Crispin! St Crispin!” the motley crowd joins in a frolicsome dance.”

Somehow the Red Rosa propaganda against this woman never sat with me, her political and organisational genius really got up the noses of the Nazi pre-cursors and they brutally murdered her and her friends. It took weeks before her broken body was found. Rosa was Jewish and like her contemporaries was hounded or murdered in the era preceding the rise of National Socialism. Her genius in writing is historically underestimated and often we do not speak of the Shoah in terms of it’s vastness; and the areas where it had touched geographically. I had only recently read some accounts of the Galician and Italian contribution to an eradication programme that beggars belief. Interestingly I believe that great writers like Sylvia Plath were just beginning to look at the post-Holocaust period in terms that were not (as some critics would claim) personalising the issues but trying to contain the enormity of the issue within their tropes and symbols.

My first encounter with Rosa Luxemburg was in a Painting. I went to see the RB Kitaj Retrospective in London and sat for hours staring at ‘The Murder of Rosa Luxemburg’ and trying to absorb the minutest of detail from the canvas.

I Left London with The First Diasporist Manifesto and a copy of Pamphlets by Luxemburg.

I have published excerpts from her letters on a few sites because of they display her intimacy with nature, her knowledge of the names of things and her closeness to her many friends. 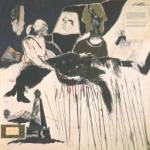